WAY back in May Diane was giving away many many hankies. The minute I saw the first picture I knew which one I wanted - didn't even need to look at any of the others (though, of course I did). Before I even received it, I knew which thread I wanted to use - Lizbeth Leaf Green Lt. I have never made a hanky edging before, didn't even have any patterns, so I decided to go searching through the ol' DMC library till one caught my eye. The Tatting Goddess was also tatting up this pattern. I had to cut and restart twice b/f I got the picot lengths right. 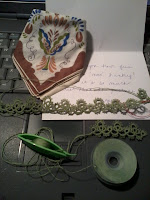 This project will probably be in the 'not finished' state for a while...I'll probably only work a tiny bit at a time while I have these three other LARGE projects going. I promise Diane, it'll get done eventually!
Posted by Red at 6:37 PM