The Judith Lind Tatting Club participates in Meet Yourself Tucson - spend a weekend letting everyone know we're there, show off our tatting skills and even teach a few people how to do it. We're going to have business cards to hand out, each with a little piece of tatting on them, so we're all tatting up little motifs. I don't want to do the same little motif for every single one (boring!) so I've been scouring my patterns for things that I could do.

LadyShuttleMaker had put up a pattern for a little treble clef a while ago but I had never gotten around to trying it out. I don't want to have to learn a new technique(folded ring) to do this, because I want this to be quick and easy. I thought if I change the pattern so I'm using the same technique Ruth Perry uses in her tatted Celtic snail, it could work out really well and I wouldn't have to worry about keeping to any stitch counts. I would also have more control over the look of the clef - I began learning to play the piano when I was in 3rd grade and picked up a few other instruments over the years. I've always thought the treble clef was beautiful, so I guess I'm a bit picky about the look. 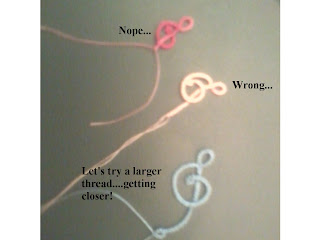 The next ones will be even better. I suppose I'm not saving any time by not learning to do a folded ring, but I tried to understand the directions and my brain is just not getting it tonight. This Celtic way is easier to tat though - practically one long chain book-ended by two small rings. I think in the next one I'm going to make the top ring into a mock ring (a chain joined to itself)...might allow it to lay flatter.
Posted by Red at 9:17 PM